Starting today about 30 miles south of the Virginia/Kentucky border, I was alarmed- nay, surprised- to find frost on many cloth surfaces this morning. I was alarmed to find ice in my water hose, though- some amount of chomping and chewing a backwashing was required before I could get water through easily. 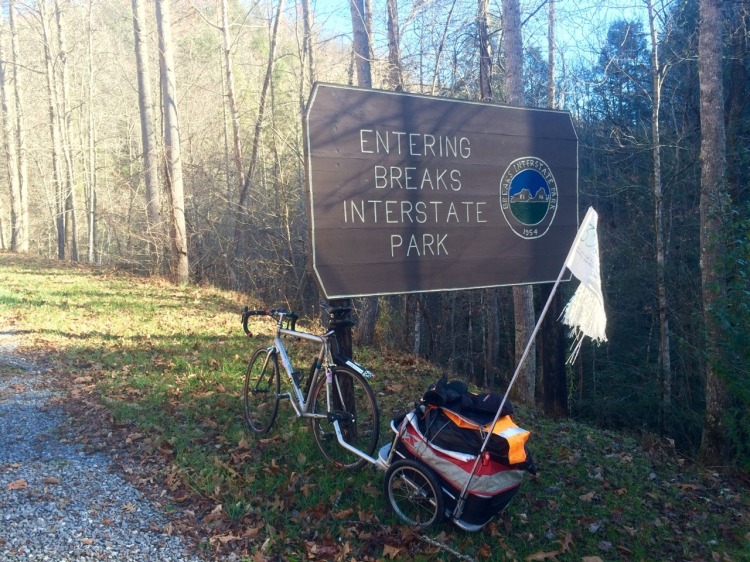 Right before reaching Kentucky, I passed through Breaks Interstate Park, the “Grand Canyon of the South” and a pretty magnificent geologic marvel. With a canyon on one side of the road and some marvelously eroded sandstone on the other, it gave a sense of going back in time millions of years as I descended a hill into Kentucky.

When you cross into Kentucky, the first sign you see says “America’s Energy Capital.” Then next one says “KEEP PIKE COUNTY CLEAN.” Apparently no one realized that these goals are at odds with each other, and that clean and coal are two words that can’t really exist together. Also, the anti-littering campaign is, I believe, only barely effective- the “Appalachian Volcano” at least represents some effort to corral litter, but trees are festooned with plastic bags and ditches are still choked with styrofoam and plastics.

The other big thing that struck me about Kentucky was the burning. All day, a continuous spectrum of smokey scents- whether sulfurous coal smoke from homes, thick tobacco smoke from gas stations and driveways, wood smoke from the several fires along the roadside, or exhaust from the passing cars and trucks- followed me as I rode. At first I didn’t recognize the coal smell, but once I realized, it was everywhere.

One thing I did enjoy about today’s ride was the low volume of coal trucks. I had read (and was worried) about a nonstop procession of dump trucks laden with flammable rocks, but being Saturday it appears that a majority of the mines are closed. Hopefully Sunday gives the same relief- it would be fine with me to get out of coal country before trucking resumes.